Derby is a hotbed of culture and heritage which is often overlooked in favour of its near neighbours. Not only is it the site of the world's first factory in Derby Silk Mill and the southern gateway of the Derwent Valley Mills UNESCO World Heritage Site, it also has a number of exciting cultural venues that attract visitors from across the UK.

COVID-19 has restricted many of us from visiting our favourite destinations and attractions during lockdown. In this itinerary we guide you through a bite-sized chunk of Derby's culture and history that you can experience in a day to make your trip as safe as possible.

For more day trip inspiration in Derby - including dedicated Adventure, Family and Shopping itineraries - visit our #ADayInDerby page to see what else our city has to offer. 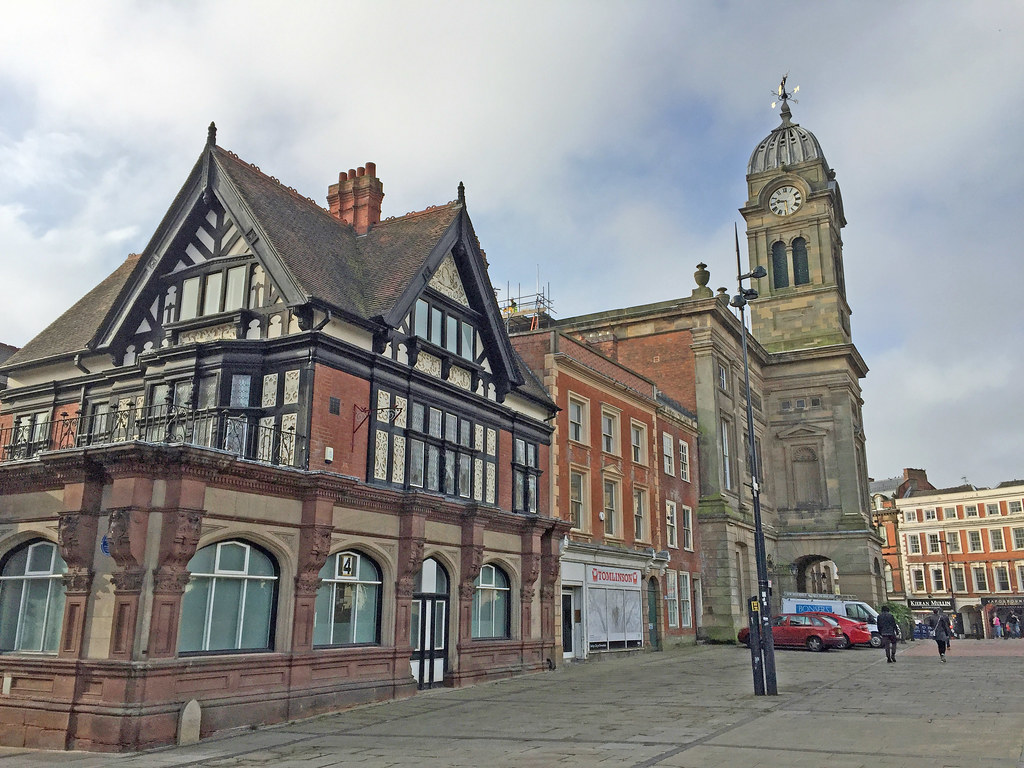 You start your tour of Derby's cultural and heritage delights at the city's historic Market Place. The area is surrounded by historic architecture and just a stone's throw away from the former site of Erasmus Darwin's residence in the town. Darwin was a renowned polymath and instrumental figure in the Midlands Enlightenment movement. His work would later inspire his grandson Charles Darwin to develop the theory of evolution and change science forever. You will notice intricately crafted mosaic stars dotted around the Market Place, you will come across these throughout the day. They form part of the city's Made in Derby augmented reality trail. Download the Made in Derby app and scan the stars to learn more about the famous people connected to the city and how they have impacted life not only in Derby but throughout the world. 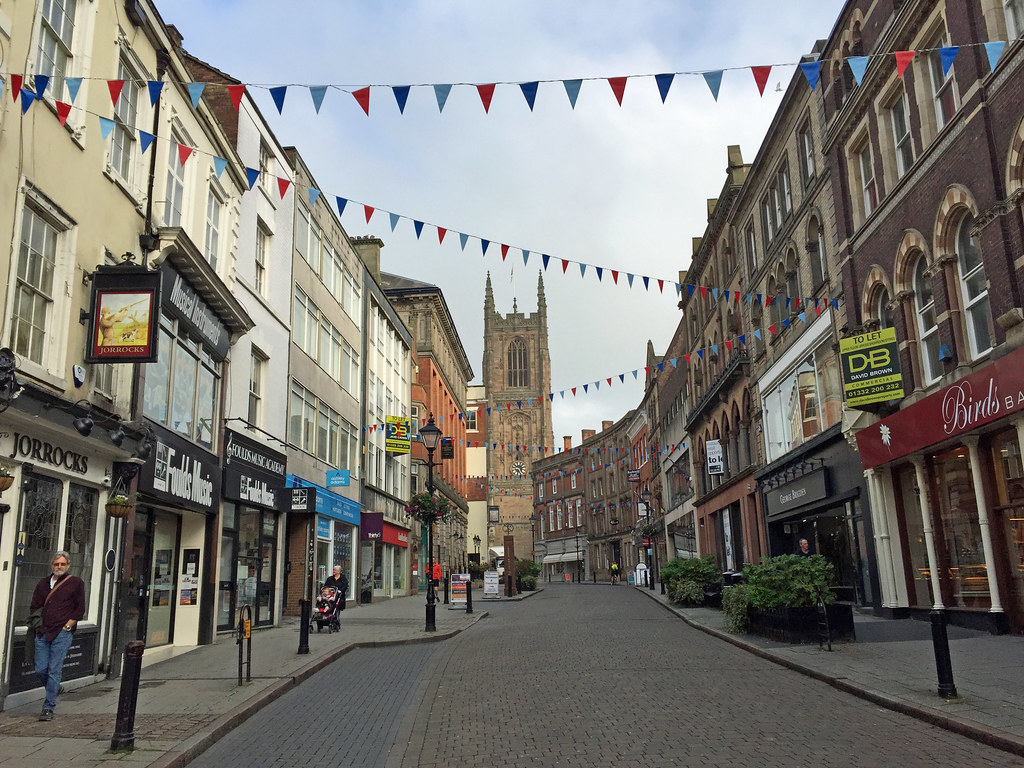 Walking up the slope on the Market Place you'll come to two of the most historic parts of the city centre: Iron Gate and Sadler Gate. To your right, on Iron Gate, you will see the towering spire of Derby Cathedral, the seat of the local bishop and a heritage gem in its own right. As you walk towards the Cathedral, don't forget to look up as you stroll and take in the variety of architectural styles which have laid claim to the buildings along this historic street, whose name originates from the craft practiced by Viking artisans that resided here. On the left-hand side of the road, you will spot a large marble obelisk topped with an orrery. This monument marks the birthplace of Derby's foremost artistic son, Joseph Wright (born 3 September 1734), who we'll meet again later. On the right you'll find Bennett's - believed to be the world's oldest department store - which is currently undergoing refurbishment. Standing proudly in Derby's aptly-named Cathedral Quarter is the eponymous building itself. Designated as a cathedral in 1927, the original All Saints Church dates back to around 943 AD when it was built by King Edmund I as a royal collegiate church. The main body of the Cathedral we can see today was built in 1725 by Georgian architect James Gibbs. The tower, one of the tallest in England at 212 feet, dates back to the Tudor period and houses the oldest ring of ten bells in the world. During your visit you may be lucky enough to climb the 189 steps to the Cathedral's apex and experience the breath-taking views of the city from above. In the Cathedral itself you will find other gems such as the 18th Century Bakewell Screen and a memorial plaque to Derbyshire's Florence Nightingale. You will also find the tomb effigy of Elizabethan noble Bess of Hardwick; for whom Hardwick Hall was built in the north of the county. 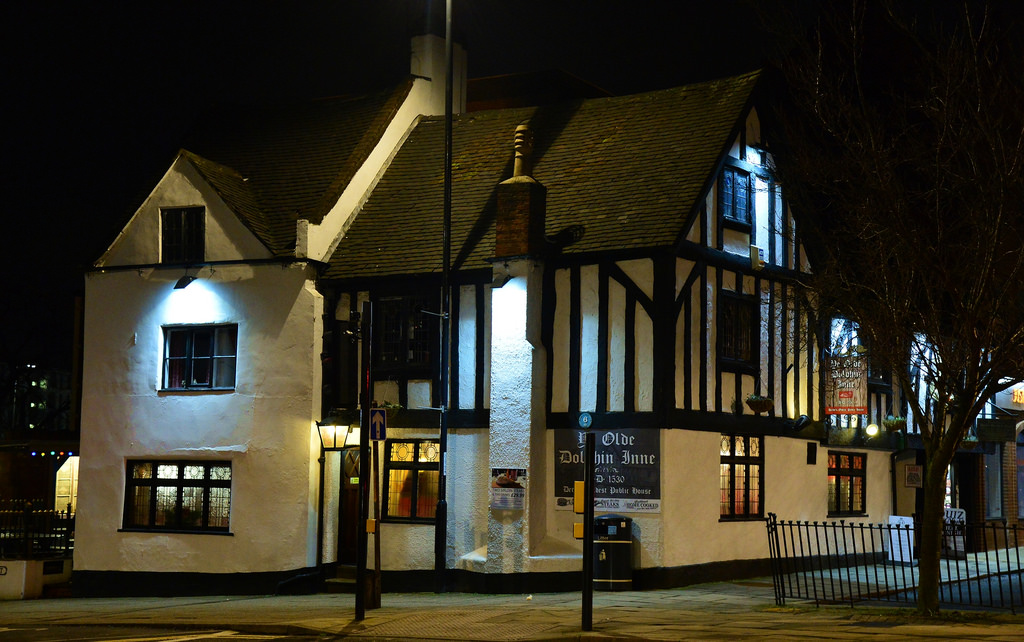 Turning right as you exit Derby Cathedral you will come across a small Tudor building on the end of the row, which differs greatly in size to the Cathedral but is no less historic! 'The Dolphin' is the oldest public house in the city serving visitors since 1530! Stop off here for a quick pint or refreshment and learn more about the pub's ghostly sightings and links to legendary highwayman Dick Turpin before continuing your journey through Derby's past.

Exiting the Dolphin and heading to the right and down the slope you will see the banks of the River Derwent and the historic Derby Silk Mill. Soon to reopen after multi-million Lottery Heritage Fund investment as the Museum of Making at Derby Silk Mill, the site forms the southern gateway of the wider Derwent Valley Mills UNESCO World Heritage Site. Until it reopens as a nationally significant museum and exhibition space, you can appreciate the architecture and history of the site, on which the world's first factory, Lombe's Mill, was built in 1721. The Silk Mill Ale & Cider House next door also depicts a mural of the Silk Mill lockout of 1833-4, which led to the formation of one of the country's first national trade unions. 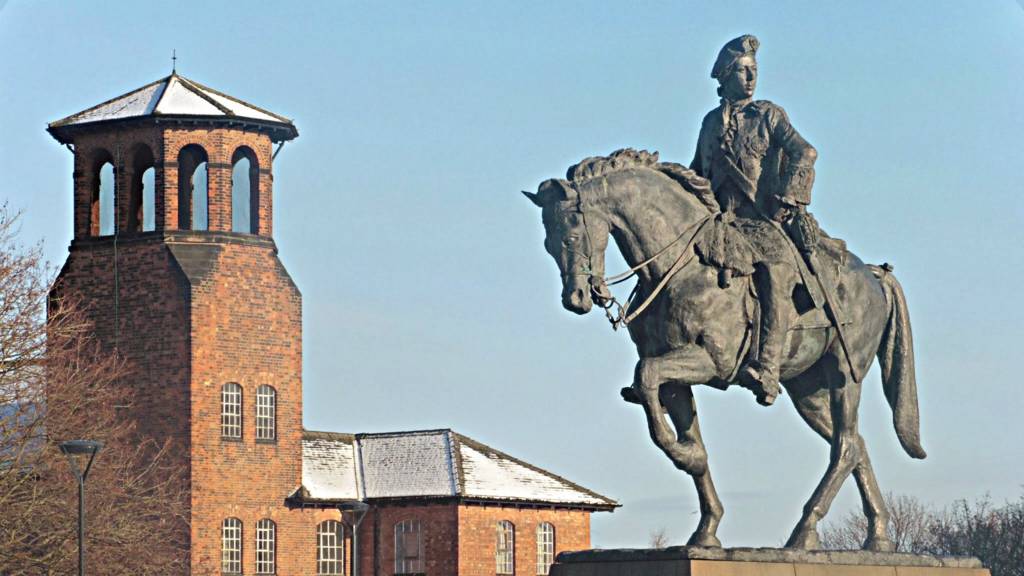 Just across from the Silk Mill stands a statue of a regal figure on horseback which dominates Cathedral Green. The figure is none other than Charles Edward Stuart or 'Bonnie Prince Charlie'. Charlie led the 1745 Jacobite Rebellion to return the British crown to his father James II who had been deposed by the Glorious Revolution of 1688 in favour of his daughter Mary II and William of Orange. Charles marched on London from Scotland with his army and arrived at Derby on 4 December 1745. After holding a Council of War and considering their future plans, the march was eventually abandoned at Swarkestone Bridge, just south of Derby.

Heading back past The Old Dolphin and strolling back down towards the Market Place, you'll find another quintessentially English thoroughfare on your right, Sadler Gate. Shops, cafes, pubs and restaurants adorn the historic buildings down this street which was once the domain of coachmen and saddle makers. One of the major sights is The Old Bell Hotel, Derby's second-oldest pub and one of the oldest coaching inns in England. Call in for a drop of real ale or home-cooked food and step back in time in the incredible Tudor Bar.

At the end of Sadler Gate, you'll find Derby Museum & Art Gallery on your left. The fantastic museum welcomes visitors from across the country and houses a number of incredible exhibits such as the largest collection of Joseph Wright paintings in the world, Roman and Viking relics from Derby's past, an Ancient Egypt display and even a prehistoric hippo! Recent temporary exhibitions have included displays of Japanese art and a series of drawings by the legendary Leonardo da Vinci.

Turning left as you exit the museum, walk down Cheapside and turn right onto Friar Gate. On your right you'll walk past another historic place of worship, St Werburgh's Church, which dates back to the medieval period. At this church Samuel Johnson – author of the world's first commonly used English dictionary - married Elizabeth Porter in 1735.  Keep walking down Friar Gate and take in the fantastic architecture on display. The street is named after a Dominican friary that existed here in medieval times – not far from the site of the Friary pub. The thoroughfare is lined with bars, restaurants and a host of shops from antique stores to craft beer outlets. As you approach Friar Gate bridge, a former railway bridge and terminal, you will come across another Derby Museums site, Pickford's House. The house was the residence of renowned Georgian architect Joseph Pickford and has been converted into a museum of domestic life in Georgian Derby. The museum is currently closed to the public until further notice although you can still appreciate the skill of Pickford's architectural design, particularly from across the street.

That brings to an end our Culture & Heritage day trip! If you fancy a bite to eat drop into the historic Greyhound pub across the road from Pickford's House for a dish from their smokehouse-inspired menu washed down with more great real ale. The pub is operated by Derby craft beer giant Derby Brewing Co. and is named after the popular Derby Greyhound Stadium which once stood near the site. After your meal, enjoy a leisurely stroll to retrace your steps and return to the city centre. Why not call at Derby Theatre for an evening play or discover more historic pubs in the city?

We hope you enjoyed our tour! If you are interested in more day trip inspiration please visit our #ADayInDerby page for more itineraries. There's so much to do in our great city! Safe travels.